Prisoners of War in Turkey WW1

Well, despite the new COVID variant (Omicron) causing confusion and uncertainty within the UK with new rules which came into force or are due to come into force within the next few days, we decided to go ahead with our meeting and managed to attract 12 members plus one guest.  A number of members had already sent their apologies due to illness or injury recovery.  The room we use at Banstead is large and well ventilated and chairs were spaced well apart.  The following is a short summary of the many and varied items displayed.

Second to show was Michael Dobbs with a small selection of recent British FPO acquisitions (post-WW2) including 911 (Berlin), 128 (Düsseldorf), 792 (Herford) and 573 in the Cameroons in 1961; he also showed five covers with Allied Censorship (Netherlands) ACN numbered cachets and sealing tape - this hopefully will be the subject of a future article in the Journal once his research is completed.  Also shown were recent acquisitions of covers posted at Royal Engineers Mobile Display Team events together some original official listings and correspondence, including compliments slips, from the late John Smith papers.  Lastly he showed a letter from the Home Postal Depot of 1962 along with a cover from the UK to Bahrain (BFPO 63) which had an extra 3d added to enable it to go airmail under the “Dutch Scheme”.

Chris Grimshaw showed what he called a potpourri of WW1 related material.  This included civilian mail from Greece to the UK censored by the French (who were the dominant country in the Salonika campaign) as well as a selection of French military postal markings (Tresor et Postes) as well as other censored mail from the French.  The display also included Allied military censorship in Lemnos Island and in particular Mudros.

Next up was Geoff Hanney with a display mainly of picture postcards which featured the evacuation of and damage to Smyrna (modern İzmir, Turkey) in 1922 and of Prince Sehzade Mehmed Ertugrul Efendi, the last crown prince of the Ottoman Empire who was removed from Turkey by the British following the fall of the Sultanate; the postcard pictured him with his attendants on the deck of the British naval vessel HMS Ajax in January 1923.  The British, along with other Allied nations occupied Constantinople (now Istanbul), capital of the Ottoman Empire, in November 1918 and the last Allied troops departed from the city on 4 October 1923.  Geoff showed a number of covers which featured British FPO cancellations (FPOs 11 to 15); these closed around November 1920 and they started to use Indian FPOs.

After lunch the first to show was Frank Schofield whose display featured the accidental death of Midshipman Dixwell Ian Alderson aboard HMS Conqueror on 15 December 1917.  Following the accident he was rushed to HM Hospital Ship China where he was seen by the Fleet Surgeon.  The display featured mail (including letters) from the Fleet Surgeon informing his family of his admission and later another letter advising of his death.  There were also letters from various officers expressing their condolences including from the Captain of HMS Conqueror and also from the Ward Room Mess President.  Also shown were a series of naval telegrams, including from HMHS China and a telegram from the Royal Family, sent from Buckingham Palace on behalf of the King and Queen by the Keeper of the Privy Purse, as well as telegrams wanting to know if the family wanted him buried in the Orkneys or to have him shipped home for burial at their own expense (they chose the latter).

Lorraine Maguire was next with a selection of comic picture postcards by Bruce Bairnsfather (9 July 1887 - 29 September 1959) born at Murree, British India (now in Pakistan) who became a prominent British cartoonist who drew pictures of trench life. His best-known cartoon character was Old Bill.  Lorraine show several pages of such sepia monochrome postcards, including a page of midget message comic postcards presented with “The Red Letter” magazine (these were smaller versions of the sepia monochrome issues in a bluish colour).

It was then the turn of Robert Prentice who took us back to the 19th Century with a number of items including a situation report written by the Duke of Wellington during the 1809-13 Peninsular War and he also included a synopsis of Wellington’s life.  He also showed three letters from the Crimea 1854-56, including one written by a Sergeant in the 34th Regiment to the mother regarding her son’s death in July 1855 and another which was returned to the writer in the Crimea by the Post Office who wanted a further 10d for postage!  He also included a letter of 1859 from Osborne House, at that time a royal residence in East Cowes, Isle of Wight requesting information on an apparent Russian translator during the Crimean War and suspected of being a spy!

Next to show was Geoff Hanney who displayed a selection of Christmas cards from various detachments which formed the United Nations forces in Congo during the early 1960s.  This included cards from detachments from Brazil, Ethiopia, Ghana, India, Ireland and Malaya as well as several different cards from specific Nigerian army units and a few standard UN Christmas cards.

He was followed by Peter O’Keeffe who had a selection of queries on which he was seeking further information.  This included an air mail cover from the UK to Switzerland in 1943 with both British and German censorship and a card from the USA to Denmark in November 1939 with British censorship - he wanted to know how and where the German and British censorship took place; a cover of May 1940 to a member of the RAF in the BEF in France using the abbreviation AASF - what did this stand for (Advanced Air Striking Force - formed on 24 August 1939 from the ten squadrons of Fairey Battle light bombers of No 1 Group, RAF Bomber Command).  He also had several POW mail queries from liberated France and also a cover to a German POW with the stamp backed out and couldn’t identify the stamp.

We then had time for a third showing!  Starting with Geoff Hanney, who put up two covers: one was from the Simba Rebellion of 1964 and the other was from the Commanding Officer of 5 Commando, a mercenary unit in the Congo, and postmarked Armée Nationale Congolaise in March 1966.

He was followed by Peter O’Keeffe who displayed a wide selection of green honour envelopes (A.F.W.5078) - he claimed one of each different type printed by size, shade and wording (or lack of wording) !  In March 1915 the design had changed as had the colour of the envelopes and again he showed the many different varieties, and also included two Royal Navy honour envelopes.

Then it was the turn once again of Chris Grimshaw who showed material relating to Salonika; this was civilian mail and mail censored by the French military, including the Army of the Orient (Armée d'Orient).  Some cover had an NO triangular cachet applied and this was thought to stand for “Not Opened” by the censor.  He then showed a selection of Royal Marines material from 1918 to 1936 from the late Bob Swarbrick collection.

Following on with the Royal Marines theme was Michael Dobbs who ended the days displays with five sheets on the Baltic States Training Team - this was a team of 12 Royal Marines who deployed to Latvia in January 1995 to provide training to a newly formed Baltic Battalion from the three Baltic States of Estonia, Latvia and Lithuania.  The material came from the Mike Knott collection; there was no FPO with the Team and mail was sent through the civil post at Kadaga in Latvia where the team was based.  As well as covers addressed to Mike Knott there was also headed notepaper and two items of official mail addressed to the Training Team. 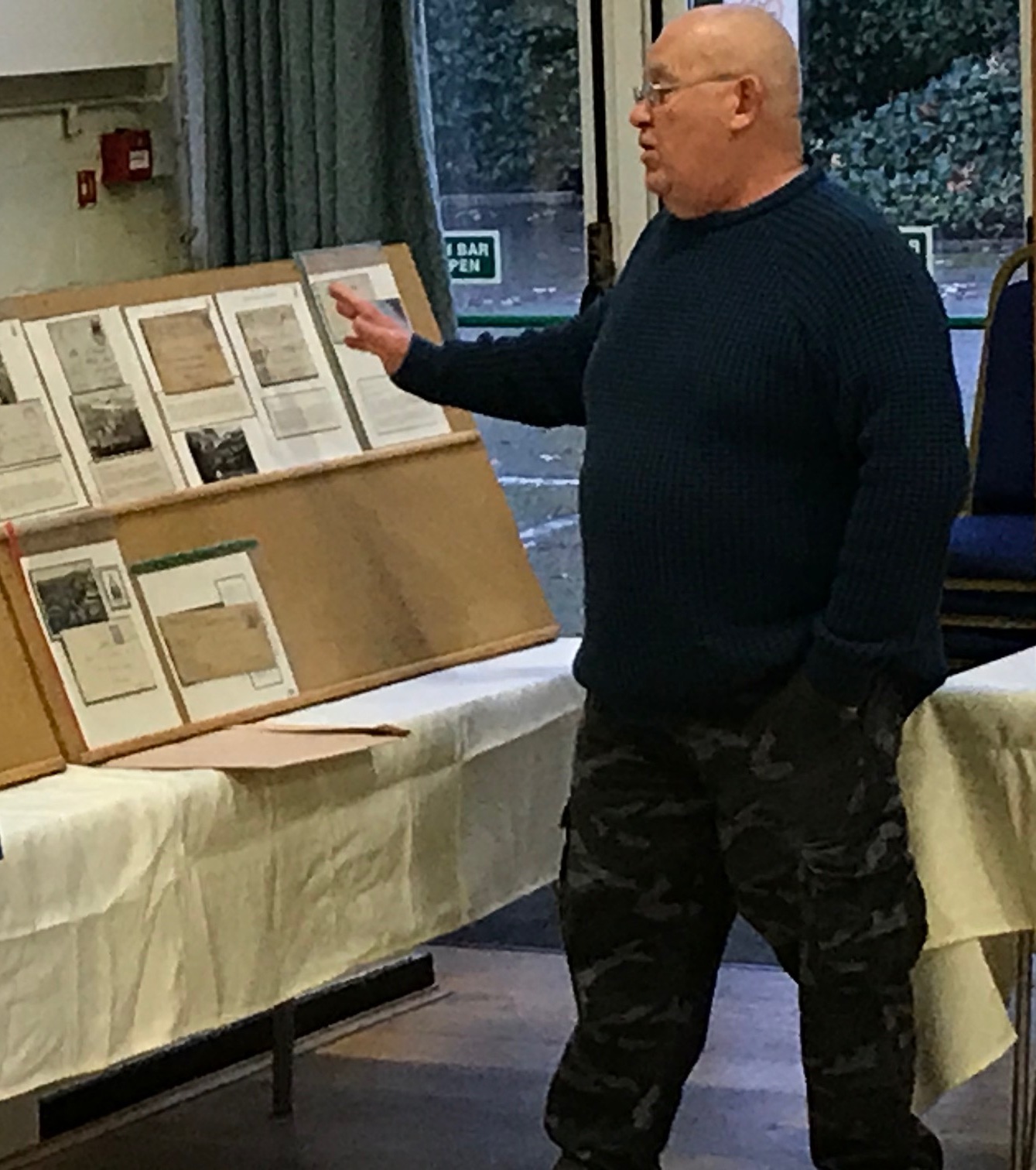 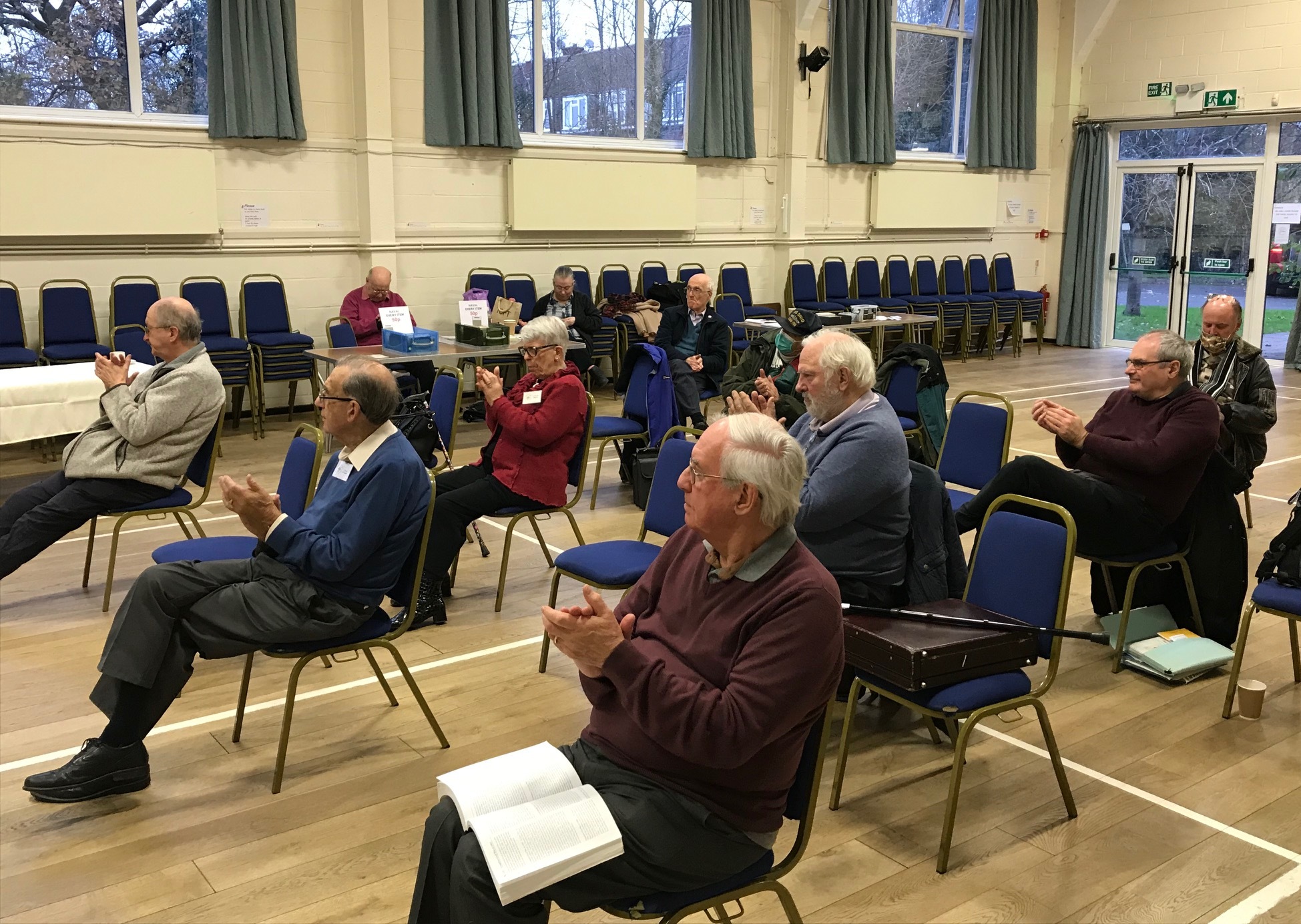 Fig B - view of the main hall where we held the meeting with members who attended showing their appreciation at Chris’ display and talk - as you can see the room is large, airy and seating well spaced.