Kiwi’s in Captivity: a display by Lorraine Maguire

This was our first meeting of 2022 and our first meeting back at the Union Jack Club (UJC) since March 2020.  As was to be expected attendance was very low, in fact there were only eight of us present at the meeting (including our speaker Lorraine) - we did have five apologies from members who would normally attend our UJC meetings.  Four of us met across the road at the Auberge for lunch beforehand and we received a very warm welcome back.  We hope that the situation improves with time and that eventually more of you will come to our London meetings.

Lorraine Maguire displayed under the theme “Kiwi’s in Captivity” and rather than concentrating on markings, mail routes etc. she has researched the stories of over 80 Prisoners of War, for which she has mail and who were interred in Italy and Germany. This included their backgrounds in New Zealand, enlistment and brief military history. She can relate to these young men and the effects on their families, having lived through those times and with her own brother dying in Egypt and with four cousins all fighting overseas.  New Zealand declared war on Germany on 3 September 1939, simultaneously with Australia, France, India and Great Britain. Volunteers in the First Echelon, the Fourth Infantry Brigade and support troops arrived in Egypt in February 1940. Further Echelons reached Egypt throughout the war, so that the maximum strength of the Second New Zealand Infantry Division reached nearly 35,000.  The New Zealanders saw action in Greece, Crete, North Africa and Italy. Total casualties numbered over 6,000 killed in action and over 8,400 Prisoners of War, of whom 500 died in captivity.

Over 4,000 "Kiwi's" were sent directly to German POW camps from campaigns in Greece and Italy. Because the Italians were the senior partners in the North African Campaign, Allied soldiers who were captured in North Africa were sent to Italian POW camps. On the capitulation of Italy in September 1943, most of the Allied POWs in Italian hands were transferred by the Germans, to camps north of the Brenner Pass. A small minority (about 400 of the total of 4,000 Kiwi's), escaped to the Allied Lines or to Switzerland, where they were interned or joined the Italian Resistance.  The display contained examples of the following:

Lorraine's favourite soldier was Howard John Holmes. When Crete fell he was taken prisoner on 1 June 1941, after seeing much action. He remained a POW in Germany until he was liberated 1 August 1945, just two weeks before the war ended. She had a postcard for Xmas/New Year 1942/1943 sent by Howard to his mother in Gisborne. While researching him on the Auckland Cenotaph Database she found an e-mail address for his grandson, so contacted him and said what she had. From there a correspondence developed and she received several very good photos and learnt his story. His grandson Hayden was now in the NZ Army and had been chosen as one of three to represent New Zealand and go to Crete for the 75th Anniversary of the Battle in May 2016. Sadly Howard died aged 97 in 2014, just two years short of the Anniversary. Lorraine felt she couldn't keep the card, so photocopied it for herself and sent the original to Hayden in New Zealand, where he had it framed and it could be passed onto his son in the future.  Some other soldiers who interested Lorraine were:

The German and the Italian authorities, as well as the Allies, enforced strict rules governing mail exchanges for POWs, agreed to internationally under the Geneva Convention. Letters from New Zealand to New Zealanders held in POW camps in Italy and Germany were reciprocally delivered. Letters in each direction had to be censored by opening, examining and resealing, thus slowing down the system.

The Air Letter Cards were introduced in November 1941; during 1943-1944 30,000 cards were used, approximately one air letter card a week for each POW. Its usage Post War spread rapidly to the civilian post and in 1953 were renamed Aerogrammes proving very popular and lightweight for overseas mail.  Examples of Red Cross mail were shown where families were trying to trace family, also telegrams sent by the NZ Defence Minister when he had news of a relative’s whereabouts. Mail was often returned to sender when their whereabouts could not be traced. A good example of this was an air letter sent to Francis Salter and covered in multiple cachets. On the backs of sheets that Lorraine showed could be read the often cheerful, often sad and sometimes with little news at all contents of the mail sent and received.

Illustrations on next page. 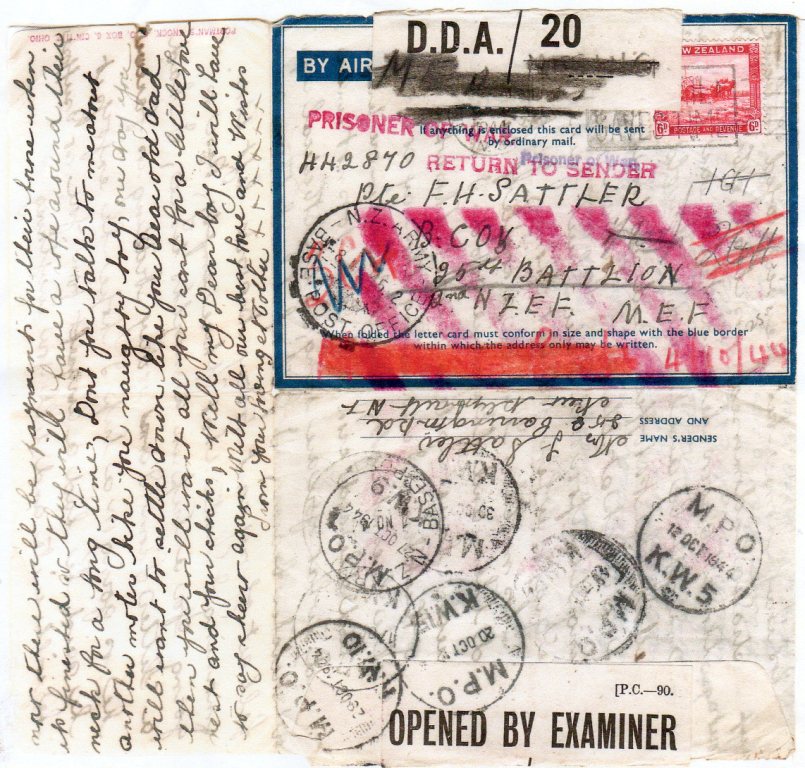 Fig 1 - An air letter addressed to Pte Francis Sattler in 25th Battalion Infantry Brigade, 2 NZEF written by his mother on 21/9/1944, stamped as POW and Return to Sender with various MPO KW datestamps for October 1944 and finally NZ Army Base Post Office in 1945. 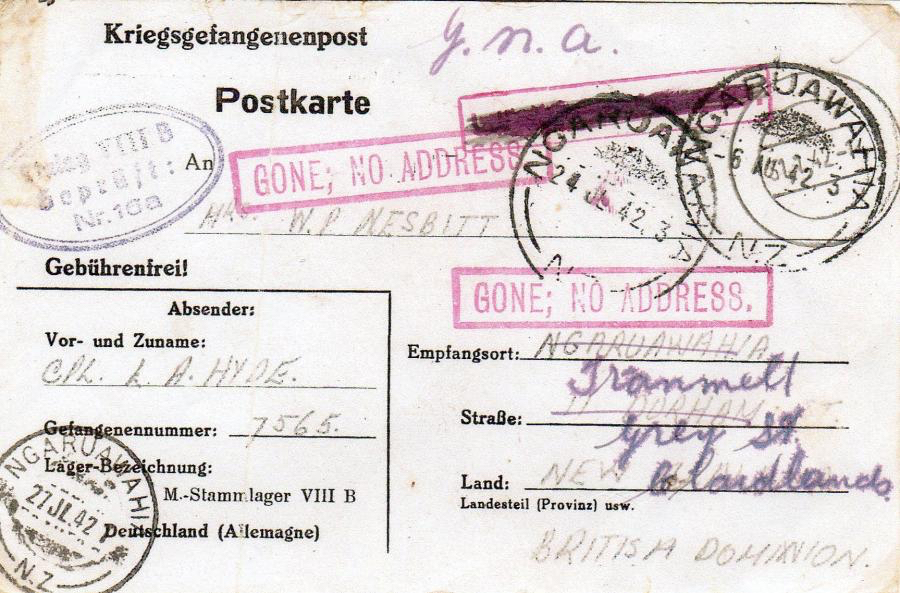 Fig 2 - A POW postcard sent by Cpl Lindsay Hyde stated to have been written on 18/1/1942 in Stalag VIIIB in Lamsdorf, Silesia to NZ where it was received in July 1942 and redirected with three GONE; NO ADDRESS cachets in July and August 1942. 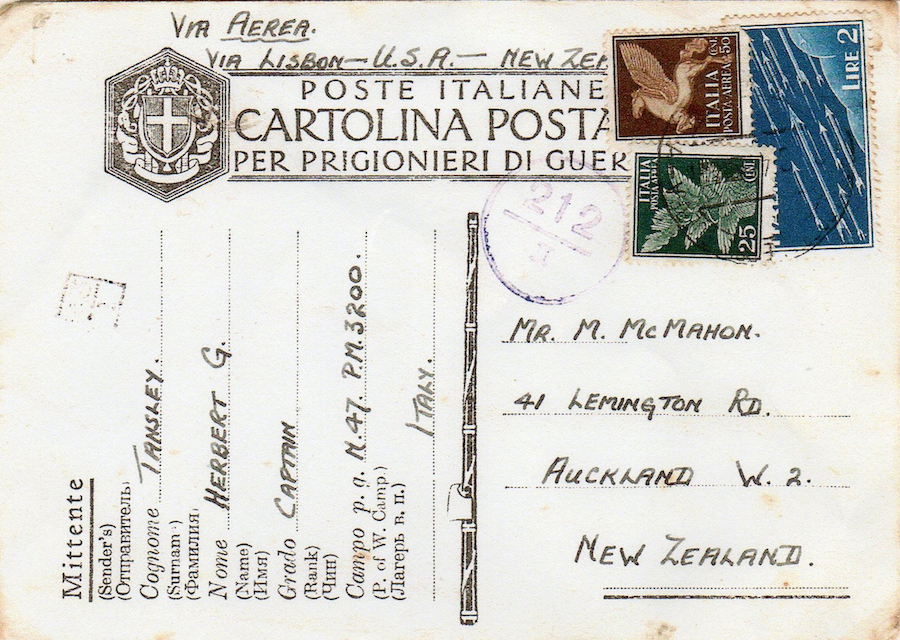 Fig 3 - An Italian POW postcard written on 7/8/1943 and sent by Capt Herbert Tansley to a friend in Auckland, NZ by airmail with the route written as “via Lisbon - USA - New Zealand and postage paid 2.75 Lire. 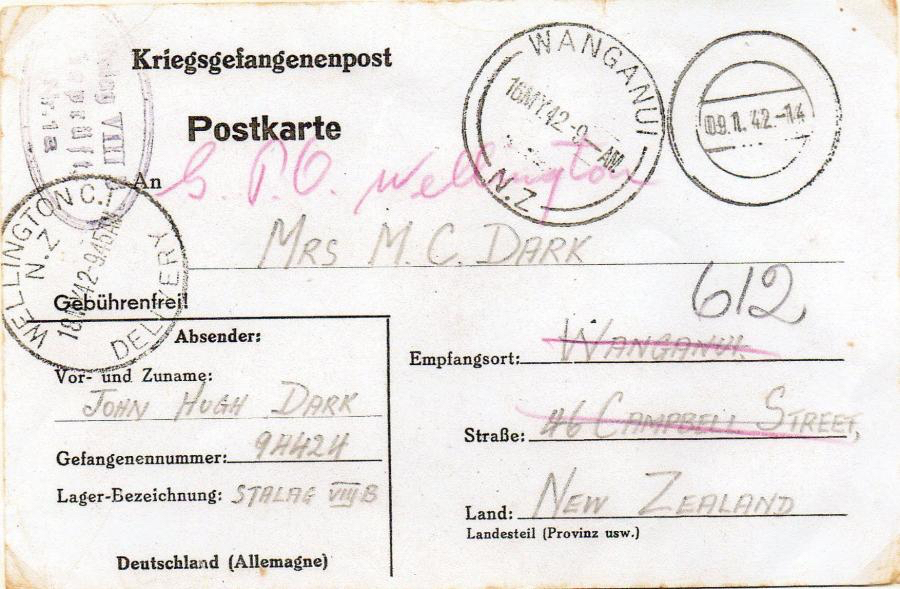 Fig 4 - A POW postcard sent by John Dark of the Royal New Zealand Navy held in Stalag VIIIB in Lamsdorf, Silesia to his wife in NZ wishing her Merry Christmas 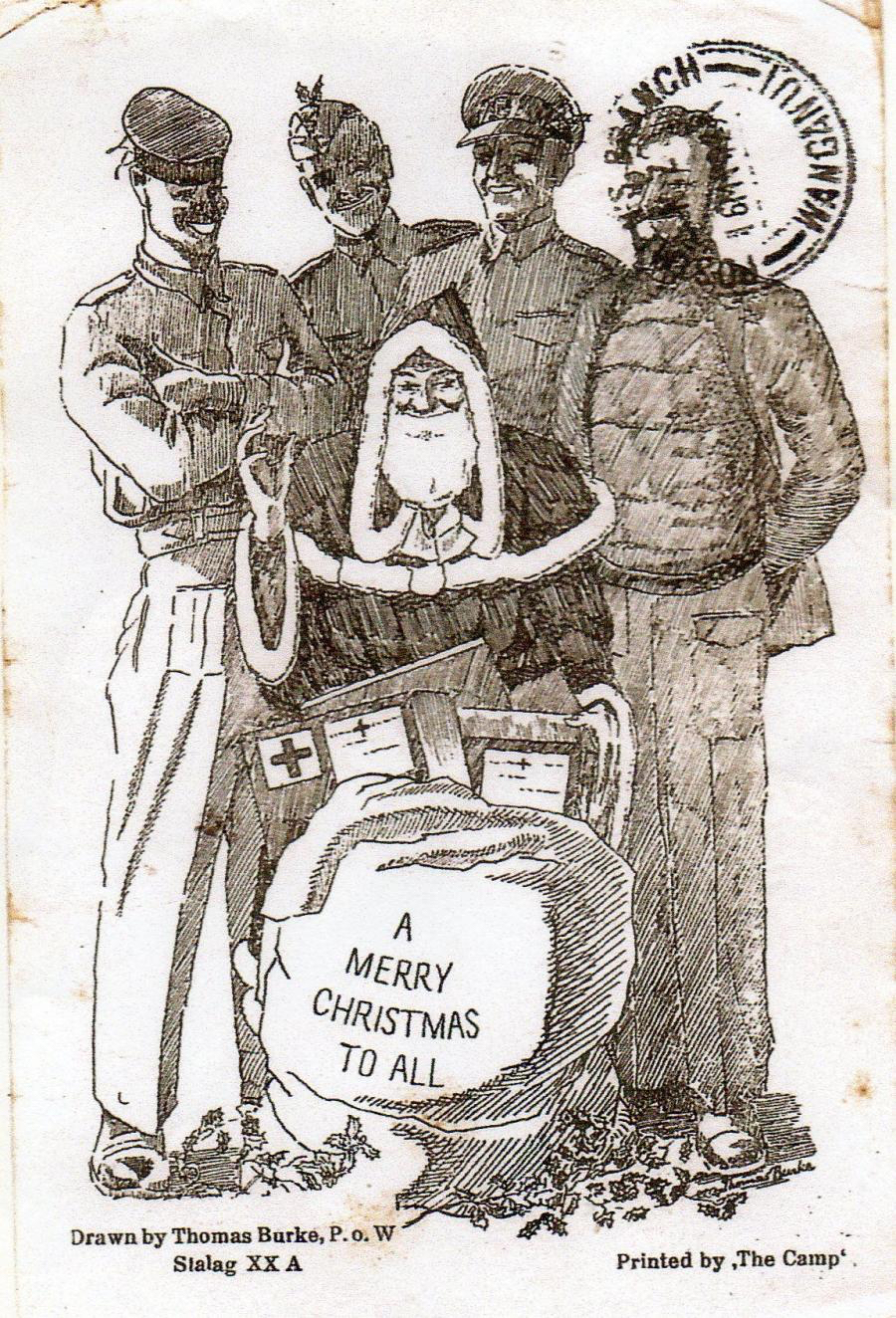 Fig 5 - The other side of POW postcard sent by John Dark: it is a Christmas card drawn by Thomas Burke in Stalag XXA in Thorn, Poland and printed by “The Camp”, a POW newspaper.