Army top brass has it covered

Army top brass has it covered

The Executive Committee of the Army Board (ECAB), comprised of the senior UK Army commanders (including the Army Sergeant Major), assists the Chief of the General Staff (CGS) in discharging his executive responsibilities for the delivery of coherent military capability, the current and future fighting effectiveness and efficiency of the Army and the morale of the Service.

In December this year, ECAB will convene its 500th meeting since its formation in 1964. To mark this milestone BFPS, in conjunction with ECAB, has produced an official commemorative cover to be released on the 14th December 2017.

The cover images depict contemporary soldiers and their respective kit from 1964 and 2017. This serves to illustrate the advancement of the modern soldier both in uniform and equipment they use. All of this comes under the jurisdiction and remit of ECAB. A personalised Smiler® stamp featuring the official Army emblem of crossed swords will be cancelled by the special handstamp BFPS 500.

Versions of the cover include:

Also available will be a few sheets of the personalised Smiler® stamps (20 per sheet) used on the cover, priced at £38 per sheet (whilst stocks last - limited numbers available).

Covers and stamps may be ordered from the BFPS shop (www.bfps.org.uk/shop)and by post by sending a cheque (payable to ‘BFPS CIC’) to BFPS The Old Post Office, Westerlea, Links Place, Elie, LEVEN KY9 1AX. 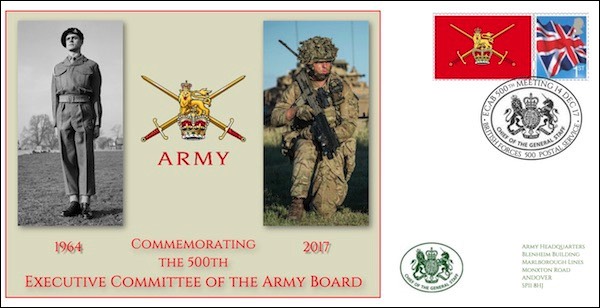