RFA TIDESPRING – A136 is the first of four MARS Tide Class fast fleet tankers entering service to support the Royal Navy and wider Defence. In particular they have been designed to support all Royal Navy warships, including the new aircraft carriers, HMS Queen Elizabeth and HMS Prince of Wales, wherever required in the world.

This official commemorative cover has been issued by the British Forces Philatelic Service, in conjunction with the Royal Fleet Auxiliary Association, to mark the introduction into service of this remarkable new state-of-the-art vessel.

The image used on the cover was taken by Capt SP Jones OBE, from the ship's boat, during the ship's 'delivery voyage' across the Pacific. The cover will bear a personalised Smiler© stamp using an image taken by Pearl Harbour Pilot Wade Armstrong when RFA TIDESPRING visited Hawaii. This stamp will be cancelled by the special handstamp BFPS 3210 which features the ship's badge.

All of these covers have been conveyed on board RFA TIDESPRING during her sea trials.

The standard covers will cost just £8. A limited-edition version, signed by prominent officers within the Royal Fleet Auxiliary, will cost £15. Also available will be sheets of the personalised Smiler©stamps used on the cover, priced at £38 per sheet. 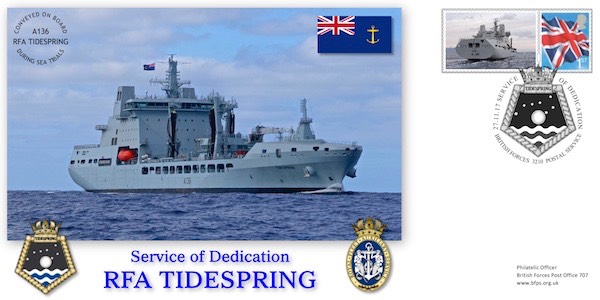