BFPS Marks The Battle of the Somme

BFPS Marks The Battle of the Somme with Special Commemorative Cover

The Battle of the Somme was fought by the armies of Britain and France against the German Empire. The action took place on both sides of the upper reaches of the River Somme in France between 1 July and 18 November 1916. It was the largest battle of the Western Front, with more than one million men wounded or killed, making it one of the bloodiest battles in human history.

BFPS has produced a commemorative cover to mark the centenary of this gruesome battle.

The image on the cover is from the painting 'Battle Of The Somme, Attack of the Ulster Division', by artist J.P. Beadle. (This painting is reproduced by the kind permission of Belfast City Council. The original painting currently resides in Belfast City Hall - 2016). A 1st class stamp from the Royal Mail’s WW1 issue will be cancelled by the specially designed BFPS 3200 Battle of the Somme special handstamp which incorporates an image of the Thiepval Memorial to the Missing.

The cover may be ordered from the BFPS online shop (www.bfps.org.uk/shop) and will cost just £6 (UK/BFPO p&p free). 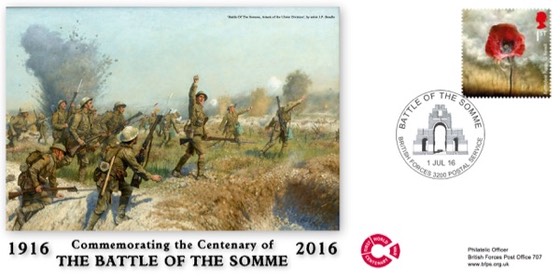