2019 sees the 75th anniversary of D-Day, the invasion of Normandy. Over the year there have been many events to honour and remember this bloody but courageous moment in our history. One such event is the Royal Navy & Royal Marines Charity (RN&RMC) and BAE Systems Heroes Challenge 2019. Held between the 18th and 24th September this will be a cycling event from London to Paris via the Normandy Landings, remembering D-Day in the process.

In collaboration with the RN&RMC, BFPS will be producing the official Heroes Challenge 2019 commemorative cover to be issued on the 19th September 2019.

The images on the cover portray the cyclists taking part in the Challenge. A 1st Class stamp featuring HMS Warspite pounding enemy positions in support of the beach landings will be cancelled by the BFPS 3223 handstamp designed especially for this event.

The following versions of the commemorative cover will be available:

Craig Wood, Commander Portsmouth Flotilla, who is participating in the Challenge. Profits from these covers will be donated to the RN&RMC.

These covers will have an A4 information insert and both will be presented in a protective cellophane slip.

Ends
An image of the commemorative cover is attached.

The British Forces Philatelic Service (BFPS) fundraises for Service charities through philately and is a not-for-profit organisation run by a small team of volunteers, both of whom are Veterans. BFPS was specially set-up to ensure that the Forces Philatelic Bureau survives and thrives. BFPS is a registered Community Interest Company (CIC) working closely with the British Forces Post Office (BFPO).

The BFPO has had responsibility for all aspects of military mail, including philatelic matters, since its formation in 1882. More recently, as part of a Strategic Defence and Security Review, BFPO was reorganised and as a result of this the Forces Philatelic Bureau was transferred to BFPS, which was specially set up, as the sole authorised body empowered to deal with all matters concerning the Forces Philatelic Bureau. BFPS is officially licensed by the UK MOD.

BFPS is managed by a retired career Army officer, who has had extensive experience working within the BFPO in general and the Forces Philatelic Bureau in particular. The second member of the management team is an ex Royal Engineer Warrant Officer who has a passion for Forces philately. Both are volunteers and are dedicated to keeping the Forces Philatelic Bureau alive and are working hard to ensure the future of this unique area of BFPO operations is secure and flourishes.

The Royal Navy and Royal Marines Charity is the principal charity of the Royal Navy. It exists to support sailors, marines and their families, for life.

Beneficiaries lie at the heart of the Royal Navy and Royal Marines Charity's purpose; it is the Charity’s duty to remain focused on their needs. Since 2007, the Charity has funded projects and facilities that boost morale for those who serve today. The Charity also distribute millions of pounds annually to military charities which care for the children, families and veterans of the Royal Navy and Royal Marines.

Website: https://www.rnrmc.org.uk/ Phone: 023 9387 1520
Email: This email address is being protected from spambots. You need JavaScript enabled to view it. 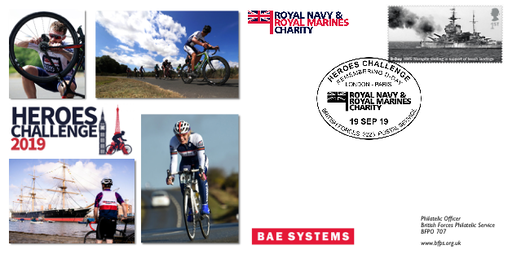