Centenary of the formation of The WRNS

The Women's Royal Naval Service (WRNS) or Wrens as they became known formed in 1917 during World War 1. By this time the Royal Navy was faced with a difficult manpower situation. To counter this the Admiralty decided to form a naval organisation for women so that they could fulfil some of the shore posts thus leaving the men to serve on-board ship.

To celebrate the centenary of this formation and the way in which the WRNS helped to define the opportunities for women in the Royal Navy, the BFPS in conjunction with the WRNS Benevolent Trust and the Association of Wrens, has produced a commemorative cover to be released on the 29th November 2017.

A Smiler® stamp includes an iconic image of a Wren saluting and this will be cancelled by the special handstamp BFPS 3211 featuring the Association of Wrens badge. The images on this colourful cover depict women who have served as Wrens over the years.
Each standard version of the cover costs £7.50 each.

We will also have for sale sheets of the Wren Smiler® stamp used on the commemorative cover at a price of £38. 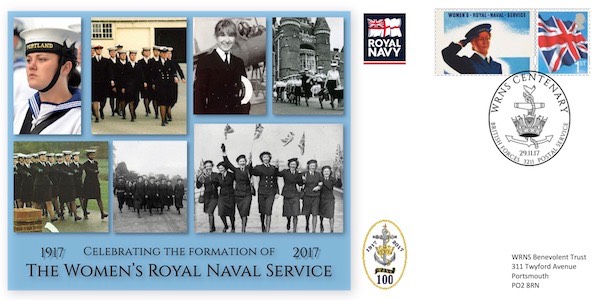