2019 sees the centenary of The Royal Air Force Benevolent Fund (RAFBF). It is the Royal Air Force's leading welfare charity, providing financial, practical and emotional support to serving and former members of the RAF – regardless of rank – as well as their partners and dependents.

BFPS, in collaboration with the RAFBF, has produced a commemorative cover to mark this historic occasion to be issued on the 23rd October 2019.

The image on the cover represents the cross section of people that the RAFBF supports. A unique special handstamp numbered BFPS 3224, with the Centenary logo silhouetted in the centre, will be used to cancel the 1st class stamp "Hurricane MK 1".

Three versions will be issued:

Profits will be donated to the RAFBF.

These covers will have an A4 information insert and will be presented in a protective cellophane sleeve making a superb memento of the Fund’s centenary.

These covers can be ordered from the BFPS online shop (www.bfps.org.uk) or by post by sending a cheque (payable to ‘BFPS CIC’) to BFPS, The Old Post Office, Links Place, Elie, LEVEN, KY9 1AX.

Ends
An image of the commemorative cover is attached.

The British Forces Philatelic Service (BFPS) fundraises for Service charities through philately and is a not-for-profit organisation run by a small team of volunteers, both of whom are Veterans. BFPS was specially set-up to ensure that the Forces Philatelic Bureau survives and thrives. BFPS is a registered Community Interest Company (CIC) working closely with the British Forces Post Office (BFPO).

The BFPO has had responsibility for all aspects of military mail, including philatelic matters, since its formation in 1882. More recently, as part of a Strategic Defence and Security Review, BFPO was reorganised and as a result of this the Forces Philatelic Bureau was transferred to BFPS, which was specially set up, as the sole authorised body empowered to deal with all matters concerning the Forces Philatelic Bureau. BFPS is officially licensed by the UK MOD.

BFPS is managed by a retired career Army officer, who has had extensive experience working within the BFPO in general and the Forces Philatelic Bureau in particular. The second member of the management team is an ex Royal Engineer Warrant Officer who has a passion for Forces philately. Both are volunteers and are dedicated to keeping the Forces Philatelic Bureau alive and are working hard to ensure the future of this unique area of BFPO operations is secure and flourishes.

About the fund
The RAF Benevolent Fund is the RAF's leading welfare charity with a proud tradition of looking after its own. We are there for all serving and former members of the RAF as well as their partners and dependent children.
Website: https://www.rafbf.org/
Phone: 0207580 8343
Email: This email address is being protected from spambots. You need JavaScript enabled to view it.
Address:
RAF Benevolent Fund
67 Portland Place 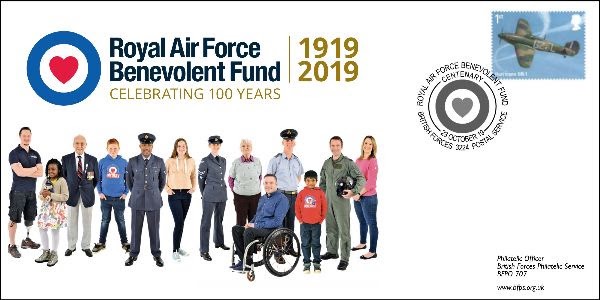