Centenary of the Unveiling of the Cenotaph

Centenary of the Unveiling of the Cenotaph

The Cenotaph on Whitehall, London was erected after the First World War to be part of the 'Peace Celebrations' in July 1919. It was only meant to be a temporary structure but as it became a symbol of commemoration for the huge loss of life suffered during the WWI it was decided that a permanent structure was needed. Designed by Edwin Landseer Lutyens the Cenotaph, made from Portland stone, was duly unveiled by King George V on the 11 November 1920.

To mark the centenary of the unveiling of the cenotaph BFPS has produced a commemorative cover to be issued on the 11th November 2020.

The cover bears a watercolour sketch of the Cenotaph by Merle Drury. A Royal Mail 1st class stamp "Battlefield Poppy, Giles Revells" from the WW1 special issue of 2016 will be cancelled by the unique numbered BFPS 3230 special handstamp.

The standard version of this cover will cost £7.50, whilst any signed version will be priced at £15. All covers include an A4 double-sided information and will be presented in a protective cellophane sleeve, making a very collectable souvenir of the occasion.

The covers and stamp sheets can be ordered from the BFPS online shop (www.bfps.org.uk) or by post by sending a cheque (payable to ‘BFPS CIC’) to BFPS, The Old Post Office, Links Place, Elie, LEVEN, KY9 1AX. 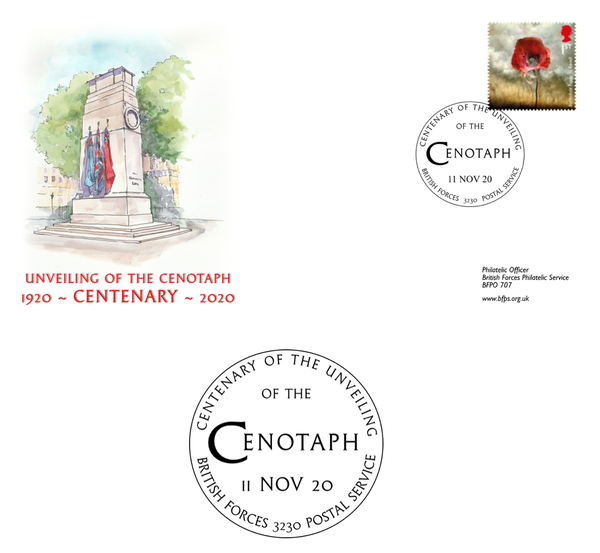