The competition took place in the afternoon, following the AGM (see elsewhere for the AGM report).  We had six entries (one down on the last time it was held in 2019 as we were not able to hold it in 2020 & 2021) including two from members overseas which we welcomed.  Voting was, as usual, by the members present at the meeting and the clear winner of the 2022 John Daynes’ Plate was our President, Robin Davis FRPSL with his entry on the “RAF Desert Airmail Service 1921 to 1926 Baghdad to Cairo”.  From 1921 until the end of 1926 the RAF operated the transporting of civil airmails between Baghdad and Cairo.  From 1 January 1927 onwards the service was operated by Imperial Airways.  The display covered airmails sent to RAF personnel stationed in Iraq 1921-26 and in many cases were those involved in the transporting of the airmails.

Second was Lindsay Chitty from New Zealand with his entry on “New Zealand Prisoner of War Aerogrammes and Postcards 1941-45”.  POW Letters Cards first became available on 17 November 1941 with the 18d stamp value.  These cards made it easier for people to communicate with POWs and also reduced censorship and air carriage problems.  The display explained and illustrated the use and design of these lettercards which had three sections folded in two places with a flap which fitted into a slit on the back of the lettercard.  As from 24 April 1943 the postage (and thus cost of the lettercard) was reduced to 1/- with a further reduction as from 24 August 1944 to 6d with all the stock of 1/- cards recalled and overprinted with SIXPENCE.  In third place was Peter High with his display of “Shipwrecked Three Times by Enemy Action”.  This was part of a correspondence from a merchant seaman caught up in the Second World War.  David Baines Freeman, born 1918, began his career at sea as a lieutenant, having graduated from the London, Midland & Scottish School of Transport in December 1939.  He joined Furness Withy & Co, Ltd and sailed on several of the line's vessels.  April 1941 saw his ship ss Nerissa sunk by a U-boat. He survived.  In July 1942, as 2nd Officer, he was on ms Pacific Pioneer when she was torpedoed by a U-boat off Nova Scotia, Canada. All on board were saved.  In February 1943 2nd Officer Freeman was transferred to HMHS Newfoundland, a hospital ship. Later that year, in May, he was promoted to Chief Officer of Newfoundland.  A series of air letter cards and airgraphs set out David's thoughts.  Airgraphs from hospital ships are rarely seen.  The hospital ship was sent to the Salerno beaches in September 1943 to assist allied troops in the landings of Sicily.  On the night of 13th September Newfoundland was hit by a missile launched from a German aircraft 40 miles off Salerno.  Six British nurses and all medical staff perished, the hospital ship burned out of control and was scuttled. Chief Officer Freeman was one of the survivors, but suffered injuries.  He eventually returned to England in January 1944.

The remaining three entries (in alphabetical order) were: Omar Elkarti with his entry entitled “The War Report”.  This was a collection of material about the Guards in and around central London as well as other regiments.  The entry consisted of postcards and stamps from different Commonwealth countries which featured various Guards regiments as well as giving a brief outline of the history of the Grenadier Guards from their formation until the end of WW2.  Lorraine Maguire with her entry “New Zealand WW2 Patriotic Covers”.  These illustrated covers had their origins in the patriotic covers used in New Zealand during WW2.  In America patriotic covers for WW2 were published before they entered the war.  During WW2 there were restrictions on the mailing of stamps from NZ to other countries but no restrictions on the exchange of covers.  With the ceasing of hostilities this came to an end.  There were no officially issued covers, rather they were created by dealers and collectors to exchange with other like minded collectors.  The Garrick family of Christchurch conducted extensive exchange of covers particularly with American collectors.  Yiannis Pipis, from Cyprus, with his entry on the “Mail Services of UNFICYP”.  This included an introductory sheet explaining the formation of the United Nations Peacekeeping Force in Cyprus (UNFICYP) and the display itself looked at the various contingents that operated their own military post offices, showing the cancellations and cachets as well as postal stationary used in the different locations on the island where UNFICYP troops were based.  This included mail from Austrian, British, Canadian, Danish, Finnish and Swedish contingents.

There was still some time following the competition to allow for other displays and so Richard Berry FRPSL showed a selection of material (ephemera) from the Rhodesian Security Forces: propaganda leaflets with strong imagery handed out by the Ministry of Information to local villagers.  It probably dates from the late 1970s and it is anti ZANU (Zimbabwe African National Union) and its military wing ZANLA (Zimbabwe African National Liberation Army) (considered to be marxist/socialist organisations) propaganda against communist fighters.  Then Peter High showed two entires posted in Portsmouth in 1797 and 1798 with some interesting contents.  They were posted by an individual who was previously on a hospital ship.  He was involved in a vessel that sank off the coast of Florida; rescued and taken ashore, where he was later pressed-ganged onto a Royal Navy vessel going back to England.  Geoff Hanney FRPSL showed a few recently purchased covers of FPOs used on manoeuvres in the UK during August 1907.  He also showed a postcard of an Army Service Corps tented camp in Grove Park, Lewisham, South East London as that was near to where our Hon Secretary lived and indeed where Geoff lived when he was a young lad! 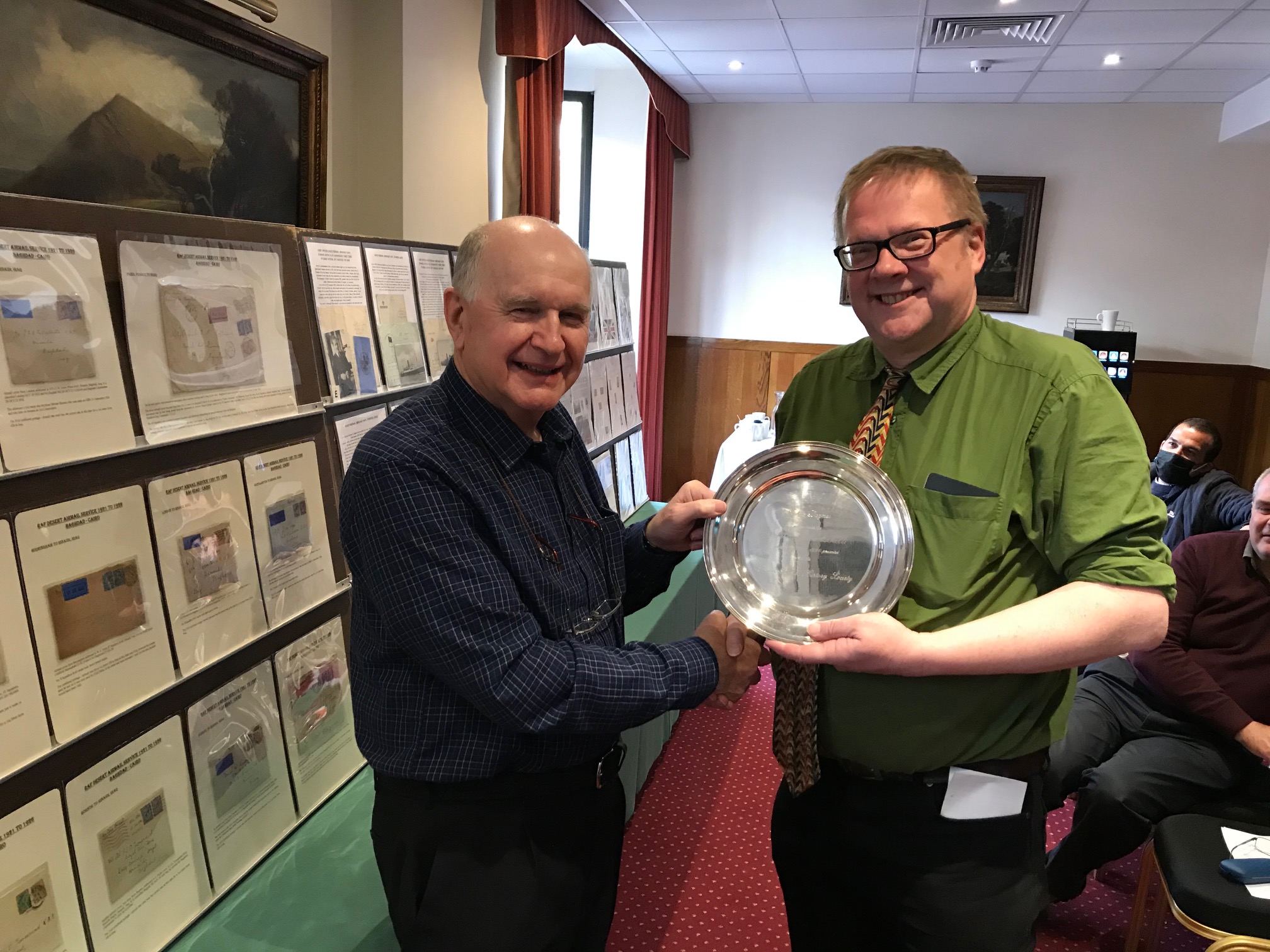