The White Helmets is the internationally acclaimed motorcycle display team of The Royal Corps of Signals. Based in Blandford, Dorset the team performs around the world. They were formed in 1927 and every year since then they have been touring the country. Currently they use Triumph Tiger 750cc motorbikes and promote the Army in general and the Corps of Royal Signals in particular. They attend a wide variety of events, including fetes, fairs, country shows and, of course, bike shows.

2017 not only sees the 90ᵗʰ Anniversary of this iconic display team, but also their final display, which takes place on the 30ᵗʰ September.  To celebrate this final display of the White Helmets, BFPS has produced a commemorative cover.

The cover bears an official team photograph by Basia Howard-Harward showing the legendary team performing their famous stunt “the human pyramid”. The cover bears a 1st Class ‘Post & Go’ stamp from the Royal Signals Museum, with a special limited edition White Helmets overprint. This will be cancelled by the unique British Forces Postal Service special handstamp No 3206. Both stamp and special handstamp carry the team’s logo.

The covers may be ordered from the BFPS online shop (www.bfps.org.uk/shop) at a cost of just £7.50. A limited edition version, signed by the photographer Basia Howard-Harward FRPS, will also be available at £15.

We are also hoping to be able to have for sale some collector’s sets of the 1st Class ‘Post & Go’ stamp from the Royal Signals Museum, with a special limited edition White Helmets overprint. Please watch the BFPS website for further information. 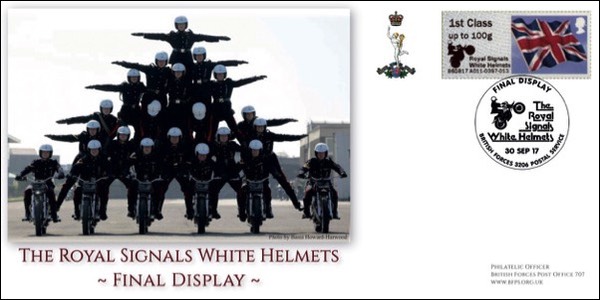