NAAFI - 100 Years of Service to the Services

NAAFI - 100 Years of Service to the Services

The Navy, Army and Air Force Institutes (NAAFI) was established by the British Government in December 1920 when the Expeditionary Force Canteens (EFC) and the Navy and Army Canteen Board (NACB) were combined to run the recreational establishments needed by the Armed Forces, and to sell goods to servicemen and their families. Since then NAAFI has supported the British Forces at home and abroad, including the conflicts in The Falklands, the two Gulf Wars and Afghanistan amongst many others.

In December this year NAAFI celebrates its one hundredth birthday and to mark this BFPS has produced a commemorative cover to be issued on the 9th December 2020.

This centenary cover will feature the NAAFI centenary logo with a Royal Mail bespoke Personal Smiler® stamp bearing the current NAAFI corporate logo. The stamp will be cancelled by a BFPS special handstamp carrying the unique BFPS number 3232.

The standard version of the cover will cost just £9, whilst the limited edition signed by the Managing Director of NAAFI will be £18.

All covers include an information insert telling the story of the organisation and will be presented in a protective cellophane sleeve making a very collectable souvenir of NAAFI’s Centenary. 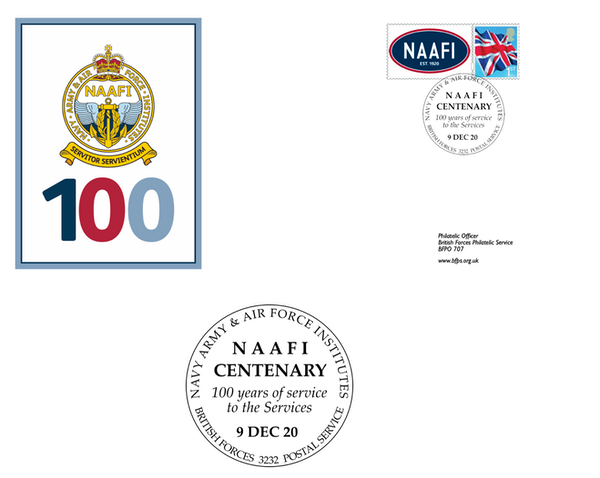