The Battle of Passchendaele, also known as the Third Battle of Ypres was fought between Allied Forces and German troops in some of the worst conditions WWI ever saw. It was even referred to as the "Battle of Mud” due to the amount of mud and grime that was caused by heavy rain and destruction of the land by artillery bombardment. Losses on both sides were extremely high.

British Forces Philatelic Service has produced a commemorative cover to mark the Centenary of this grim Battle on the 31 July 2017.

On the cover a very apt image of the painting “'Passchendaele' - Soldiers In Mud Near Ypres In Belgium During World War I” by artist William Hole shows the miserable conditions that the troops had to endure. The cover bears the Royal Mail special issue WW1 1st class stamp “‘Dead Man’s Dump’, Isaac Rosenberg” which will be cancelled by the unique British Forces Postal Service special handstamp No 3205. The centerpiece of this handstamp features a sketch by artist Merle Drury of the ‘Cross of Sacrifice’ from Tyne Cot cemetery in Belgium.

The covers may be ordered from the BFPS online shop (www.bfps.org.uk/shop) at a cost of just £6. 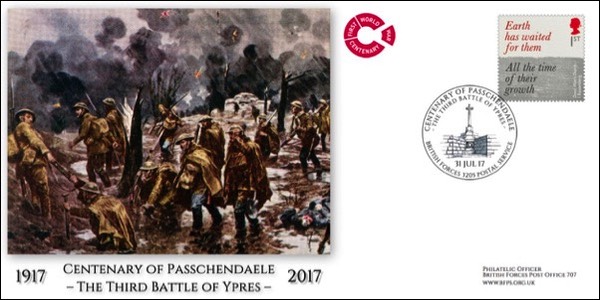