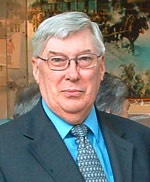 At the Annual General Meeting held on 17 April 2004 Honorary Life Membership was conferred on John Daynes, a point universally approved by every member present. This was in recognition of the enormous amount of work and support provided by John to the Society over many years and in so many important roles. John had worked for the Society since the late 1950's.

He was President 1988-1991, Librarian 1974-2004; Editor of the Newsletter 2003-2004, and had been a prolific contributor for many, many years; and he took over the postal auctions following the death of the late Alan Brown. He was also the programme organiser (having played a leading role in the formulation of our annual programme over a long period) from 2001. In addition John helped out in so many other ways: a strong supporter and advocate of our once plentiful and regular provincial meetings, he also organised the engravings for both the President's Cup and the Harry Cope medals. Congratulations and a big thank you John, from us all.