14th May 2022 - United Nations in the Congo: a display by Geoff Hanney FRPSL

Geoff stepped at short notice as, due to various circumstances, our scheduled presenter had to pull out of his proposed display.  Geoff is a United Nations (UN) collector and his display told the story of the UN peacekeeping involvement in the chaos and disorder that erupted in the Congo following its independence.  At that time the Congo was a Belgian colony and had been since 1908, known as the Belgian Congo.  Around 1958 it sought independence and it eventually achieved independence from Belgium on 30 June 1960 under the name "République du Congo" (Republic of the Congo in English).  However, the newly independent country soon descended into chaos: on 5 July Congolese soldiers in the Force Publique mutinied against their white Belgian commanders, mainly due to pay discrepancies, while on 11 July the province of Katanga declared its own independence from Congo and was involved in secessionist struggles against the newly independent Congo leadership.  Worsening conditions saw the collapse of the central government and the intervention of foreign mercenaries.  Thousands of Europeans (mainly Belgians) fled the country against a backdrop of violence and atrocities.  As a result Belgium despatched troops to the Congo, without the agreement of the Congolese Government, for the stated purpose of restoring law and order and protecting Belgian nationals

The Congo appealed to the UN for assistance on 12 July 1960 and two days later the UN Security Council passed a Resolution which called upon Belgium to withdraw its troops and authorised the deployment of a peacekeeping force as the Congolese security forces were not in a condition to meet its tasks.  The first UN troops reached Congo on 15 July 1960 and were drawn mostly from non-aligned African and Asian states, as it was not deemed appropriate for colonialist nations to send in forces.  The UN peacekeeping deployment went by the name of Opération des Nations Unies au Congo (ONUC) (or United Nations Operation in the Congo).  The following day, 16 July 1960, Belgian troops were withdrawn from the capital (Léopoldville) and moved across the river to the French Congo.

Geoff showed material from a myriad of material from the many contingents - largely led by India, Ireland, and Sweden, but also including Austria, Canada, Denmark and Italy.  He showed a large amount of mail from the Indian Contingent, but also items from some of the smaller contingents such as Argentina, Brazil, Indonesia, Iran, Philippines, Sri Lanka, Tunisia and United Arab Republic (UAR).  The second half of the display involved a large amount of material from the various Irish contingents deployed to the Congo on rotation, as well as from the large contingents sent from Sweden.  In all there were some 32 countries involved in the UN peacekeeping operation in the Congo and at its peak numbered nearly 20,000 military personnel.  During its time in the Congo the ONCU went from a peacekeeping role to a military force engaged in many clashes and offensives against secessionist and mercenary forces.  Following an insurrection in Katanga the ONCU, largely through the Indian contingents, pushed all mercenary troops out and defeated the Katangan army which eventually led to the reintegration of Katanga back into the Congo in February 1963.  Following which the ONCU was gradually phased out whilst civilian aid increased until UN personnel were withdrawn entirely in June 1964.  Other countries, such as the UK and USA, provided sea and air transport facilities to get the UN contingents and their equipment to/from the Congo.  The UN contingents used various mail facilities, such as the UN Post Office, contingent FPOs or the civil post.  You can see two examples of UN covers, one from an Irish contingent (34th Inf Bn) and the other from the Ghanaian contingent on our website.

As usual with more modern displays, this display consisted largely of philatelic material from well-known collectors of the past, most of whom were members of the Society.  Collectors such as Eugene Jagger, Alistair Kennedy, Mike Knott, Freddie Menne-Larsen, Betty Miller (USA) and Frederic Patka (Austria) to whom we owe a gratitude of thanks as otherwise such material would not exist today. 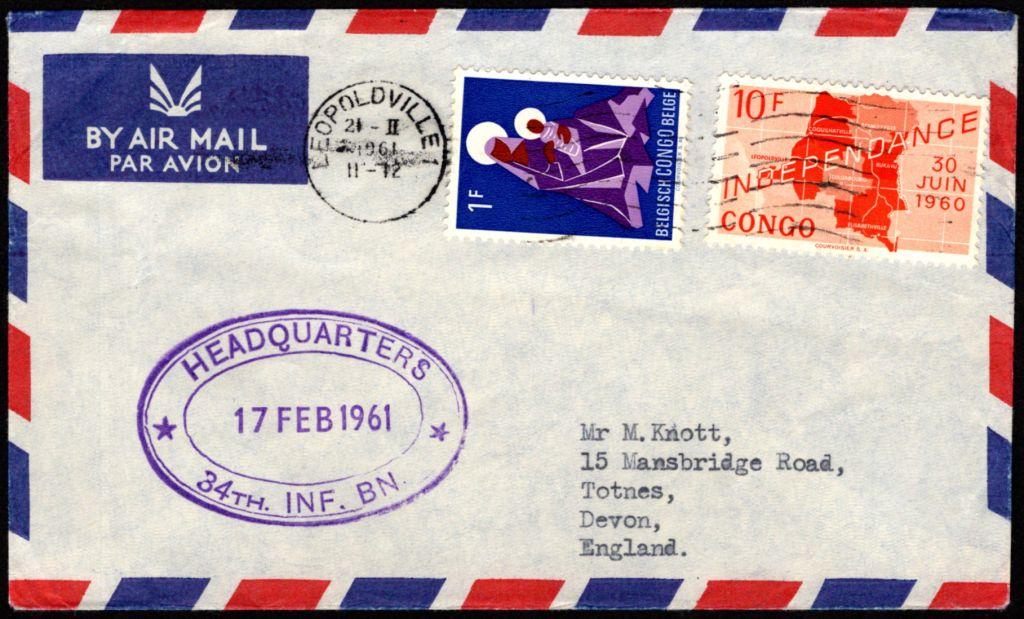 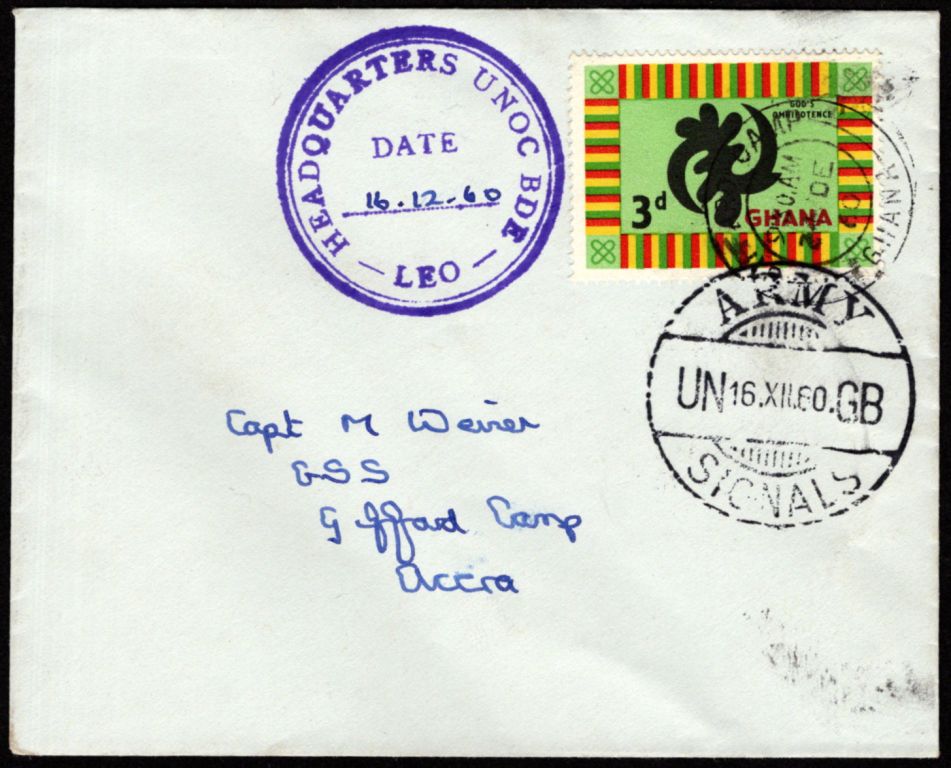 Also has the Headquarters UNOC Brigade at Leo (Leopoldville) with manuscript date 16-12-60.

Also has an arrival datestamp of Giffard Camp, Ghana on 24 DE 60 (Giffard Camp was at Accra).