Another very enjoyable meeting at the Union Jack Club held in a relaxed informal atmosphere with 10 members present.  We do hope that more of you will feel empowered to attend our London meetings in the future, despite the continued presence of Coronavirus (covid-19) within the UK as a whole.  Our subject for displays was “ephemera” but let us start with trying to explain what is meant by “ephemera”?  You can look online (or in a dictionary) for the meaning and you are likely to find several variations, such as “things that exist or are used or enjoyed for only a short time”; “collectable items that were originally expected to have only short-term usefulness or popularity”; “paper items (such as posters, broadsides, and tickets) that were originally meant to be discarded after use but have since become collectables” and many more variations.  Ephemera have long been collected by the likes of families, hobbyists and curators, with certain instances of ephemera intended to be collected - and that includes us - postal historians.  We collect paper items (envelopes, postcards, leaflets, posters, etc) so it wasn’t a difficult topic on which to show material!

First up was Geoff Hanney with WW1 and British Occupation of Germany related material; a picture of a Punch cartoon and a German invoice for printing British military Christmas cards.  Also a selection of official RAF photographs of No 7 (Pathfinder) Squadron Lancaster bombers in Singapore.

Then our President, Robin Davis, was next with various items relating to the EOKA campaign in Cyprus, in particular a detention order and release order for an individual; ENOSIS material including overprinted Cyprus stamps and labels.  Also leaflets dropped by the British Forces.

Michael Dobbs showed a variety of material including the “Manual of Army Postal Services - War - 1937”, an Allied Expeditionary Force (AEF) Safe Conduct pass for German soldiers, an open letter leaflet from the Supreme Allied Commander on the termination of Supreme Allied Command on 14 July 1945, a “Non-Fraternisation” letter from the C-in-C BAOR, together with a demob card given to soldiers in 1946 amongst other items relating to the end of WW2 in Europe.  Also, as he spent 7 years in the Army since leaving school in 1968, his certificate of Service and other forms/leaflets relating to his service as a staff clerk in both HQ AFCENT in Brunssum and later HQ NORTHAG at Rheindahlen.

Last to display in this first round was Richard Berry who showed items connected to Rhodesia, including extracts from various newspapers and photographs relating to UDI, Defence Forces (Discipline) Regulations, various magazines with military related themes, numerous leaflets, an official letter changing the name of a company to remove the name “Rhodesia” from its title and also a policy statement on Zanu.

Our second round started with Lorraine Maguire who put up what she described as her “other clutter”!  This consisted of a number of souvenir silk handkerchiefs or place mats, both large and small from both world wars.  She also showed various books, including one on the “Road to Rome” and magazines connected with North Africa in WW2.  She also produced a souvenir bag and various books, reprinted newspapers and leaflets connected with the 100th anniversary of the Gallipoli campaign held in 2015.

Richard Berry came in with a second showing (mostly by turning over the items shown in his first display!).  Items shown included political magazines and leaflets as well as paperwork connected with an individual who joined the Rhodesian Army as an officer.  There were also notices from the British South Africa Police; items connected with Brighton from Australian / New Zealand forces and also some large posters (A3 size) under the heading “beware” issued by the Police HQ, Salisbury (Rhodesia) on self protection.  Peter High was next with official forms, diplomas, connected with Italian hospital ships from both world wars; Royal Decrees from the Third War of Independence in 1866 and another from 1884; an official diary issued to a nurse in 1937 relating to her progress and a large tray cloth of the vessel St Andrews embroidered by a nurse.

Our third showing and last display was from Peter Burrows with a selection of WW1 material. This included a set of postcards showing photographs in 1914, a selection of reproduction posters, including a couple of Royal Navy posters, a 1914 Post Office booklet on letters, parcels and gifts for the Army, an example of a letter sent to next of kin of dead soldiers, various government letters, a thank you letter from the Postmaster General to postmen who had signed up for the Army, extracts from “The Bystander” magazine.  Also a complete set of postcards and the wrapper in which they were enclosed on “Sketches of the Yank’s Life” and lastly a selection of French letter cards which contained military illustrations or song cards. 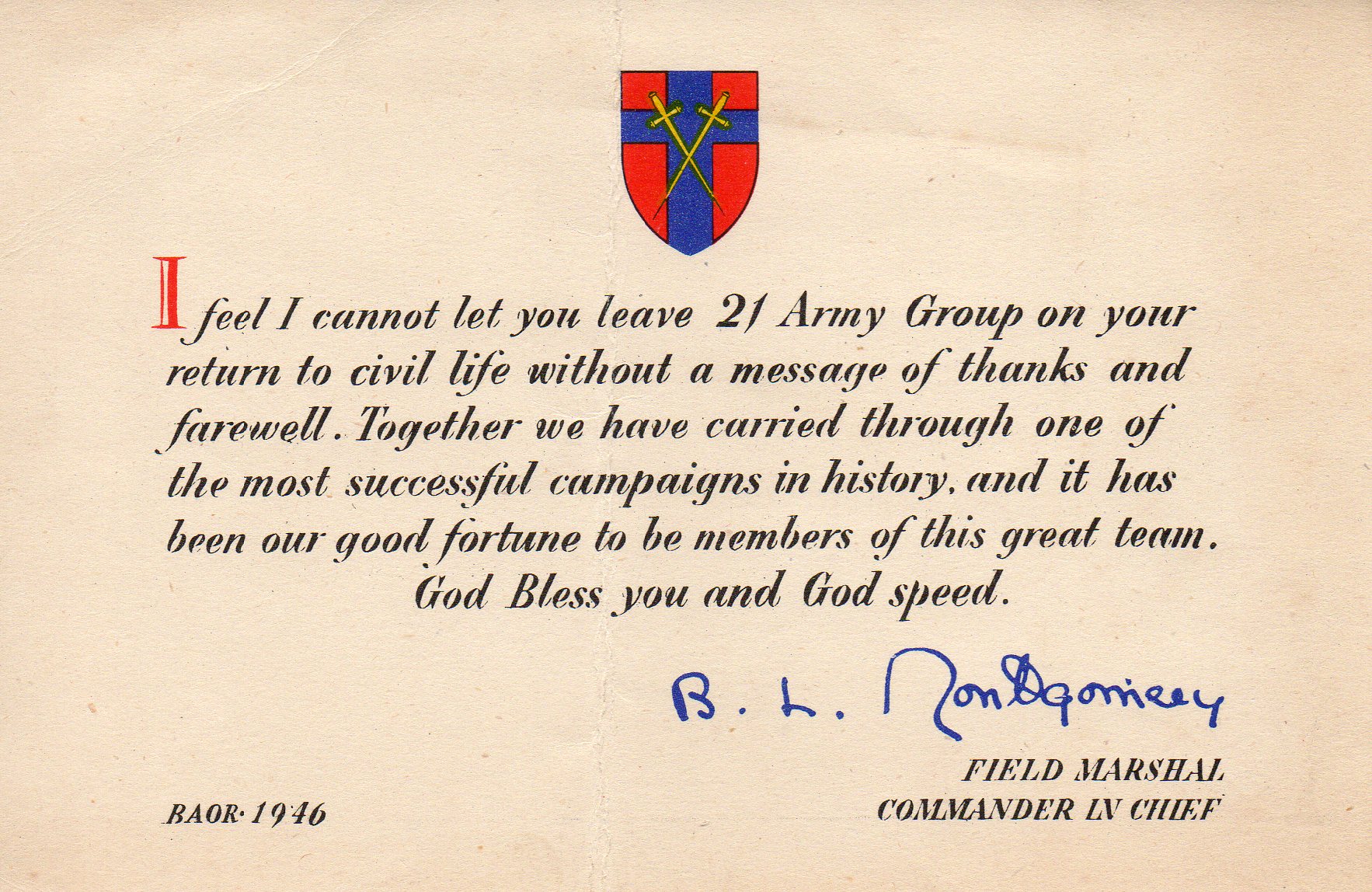 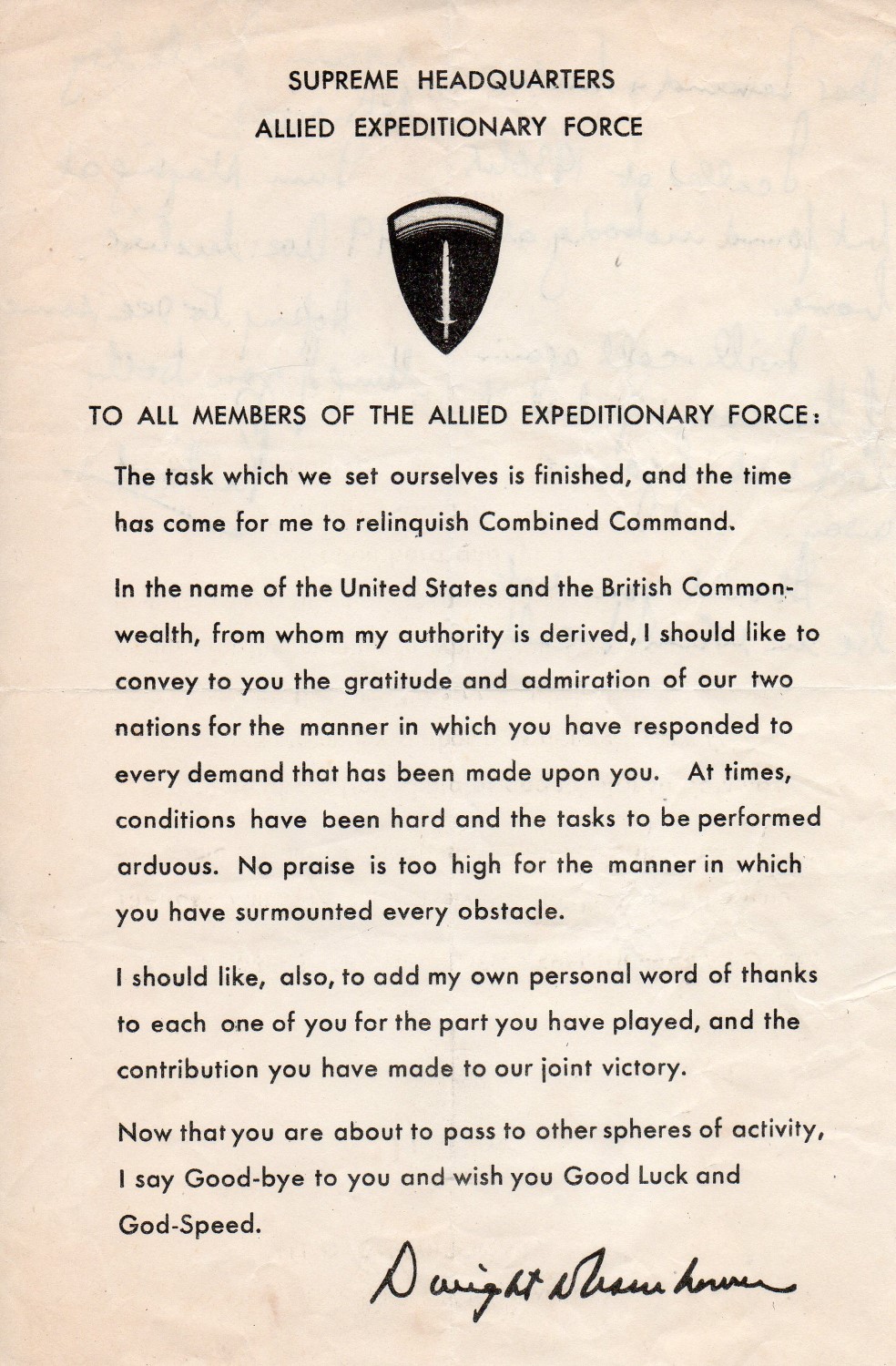 An open letter announcing the termination of Supreme Command which took effect on 14 July 1945 and signed by the Supreme Allied Commander, General of the Army Dwight D. Eisenhower